We Campaign to change Dairy Farming in Scotland for the better…

We campaign to promote: 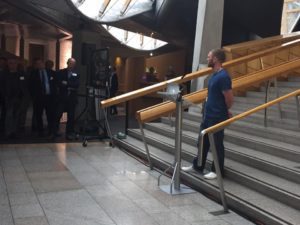 We campaign in various ways. Farmer Bryce is a Climate Change Champion for the Scottish Government. He regularly gives talks in this capacity educating policy makers about many things, including the role that pasture management has to play in reducing carbon emissions. Responsible Farming has a huge role to play in contributing towards the target of Scotland becoming a carbon-neutral country. 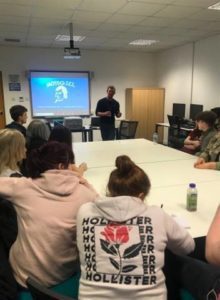 Another way that we campaign is commercially. This is something that we believe strongly: the only way that real, positive, lasting change can come is through commerce. This might seem counter-intuitive, especially given all the negative feelings directed towards business generally in the environmental debate, but consider the following example with the objective of reducing single-use packaging:

Scenario a) could certainly increase awareness of the issue for those people who saw the placards.

Scenario b) does not sound like it would change the world, and as one coffee-shop owner recently asked:

“What difference can I make? I just run a wee coffee shop!”

When this particular coffee shop owner got the calculator out though, it turns out that this business will reduce single-use plastic consumption this year by 5,100 2-Litre Milk Jugs!! Suddenly, not so wee! This is a real-world example, with real-world impact and real-world consequences.

Commercial campaigning produces real, lasting change. Speaking to our supporters, we know that there are many thousands of people who care about these subjects. Public awareness is on the rise, which is a very good thing. Not every-one runs a business though, so what can consumers do to help with this type of campaigning? The answer is simple: ask! Businesses, especially local businesses, will give their customers what they ask for. They must give their customers what they ask for! 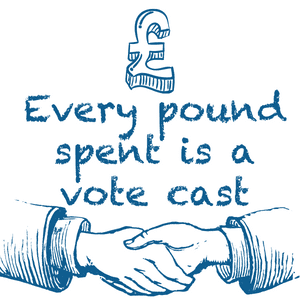 Where you spend the pound in your pocket matters. This is the crux of it, the really important point, so we’ll say it again in great big letters:

Where you spend the pound in your pocket matters!

A lot of the time, it seems, people spend out of habit rather than anything else. If everyone was to start spending consciously only on things that aligned with their values, the world would change very quickly to reflect those values more.