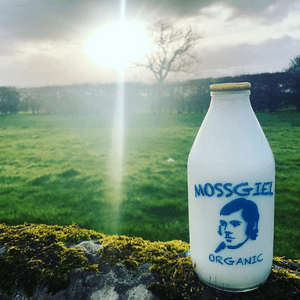 We would say that it depends who you speak to! If you’re speaking to us then whole milk means exactly what you would expect – all of the milk that our awesome herd of Ayrshire Cows produce (pasteurised, of course). Ayrshire Cows produce between 4.5% & 4.9% cream, depending on what time of the year it is. At the height of summer they produce more cream than in the depths of winter because in the winter months they are in the barn eating the silage that has been cut in the summer. Milk is a seasonal product! In these days of highly industrialised Milk flooding the shelves, this is an idea that seems to have been forgotten.

Speaking about highly processed milk, what passes for whole milk in the supermarkets  usually only means about 3.6% cream. This is the minimum level that the current regulations require to be called ‘whole milk’, so that is the level that industrialised milk is standardised to.

Why is whole milk usually standardised?

Because cream is worth more than milk. It is more expensive. If ‘big dairy’ can get away with quite literally ‘creaming off the top’ with even ‘whole milk’ then it means that they can sell the cream as well. So, the reason is pretty simple – money. Whoever asked for semi-skimmed or, even worse, skimmed milk anyway? No-one that we know! We would argue that the cream in Milk is really healthy and the idea that ‘all fats are bad’ is complete nutritional nonsense.

This standardisation has led to the belief that Milk is somehow exactly the same all year round, which is also clearly nonsense. It leads people away from having a connection with their food and where it comes from. It is good to note though that an increasing number of people are becoming wise to this and beginning to ask far more searching questions about the provenance of what they put in their bodies: where it comes from, how it is produced, the environmental impact.